HydroFlow P Series Industrial descaler is one of the best device produced by Hydropath Company, which has three main functions, control and remove limescale, killing bacteria and biofilm removals and increasing flocculation in filtration system. Due to its special ability in descaling, it is mostly used in industrial cooling towers, chiller condenser and heat exchangers. Optimized radio signals, in the P-Series have made it possible to kill pathogenic bacteria and algae. The first function of the HydroFlow P series is to prevent limescale formation. The signals applied by the hydroFlow descaler are transmitted both upstream and downstream in water, Which converts carbonate, sulfate, and magnesium ions into extremely fine and stable crystals of a micron size? These crystals do not adhere to the surfaces and they are suspended in water and, if necessary, drained out from the plumbing system. Also, HydroFlow descaler is the only technology that can remove old limescale from the entire circuit of plumbing and heat exchangers, without the need for salt water softeners. Even using hard water plumbing system, HydroFlow create non-sticky and soft sediments in the plumbing which could be washed away by water. The second function of HydroFlow descaler is the ability to kill bacteria and algae and microorganism that have cytoplasm. By inducing electrical signals of 120 to 200 kHz in water, microorganisms are regularly subjected to positive and negative electrical charge and eventually the cytoplasm will rupture due to osmosis pressure. The third function of HydroFlow P series is the ability to increase flocculation of suspended particles in water mainly in pressurized filtration systems which increase filtration efficiency, especially for swimming pools. Experiencing crystal clear water is super easy by installing the HydroFlow P series on the pump suction of the filtration system . The fourth function of HydroFlow descaler is to eliminate the chlorine odor in pool area and decrease chlorine consumption up to 70%. The reduction of harmful byproduct of chlorine like THMs and chloroform is easily accomplished by the P-series industrial descaler. Also the best and most important issue to install the HydroFlow P series in the condenser chillers is the ability to omit salt water softeners from cooling tower’s make up. This would benefit for direct use of hard water without chemical treatment, which saves water consumption up to 30%.Also with HydroFlow descaler P condensers and heat exchangers do not need acid wash. 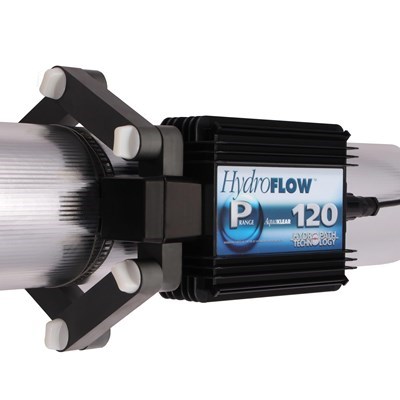